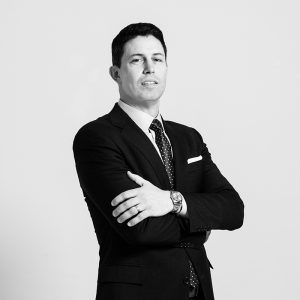 Robert McLaughlin is an experienced trial lawyer who handles high-stakes and complex litigation matters in courtrooms throughout the United States. He devotes 100% of his law practice to litigation. He concentrates in the areas of mass torts, class actions, business litigation, and catastrophic personal injury. Bob serves as national trial and coordinating counsel in industry-wide litigation and also as lead trial counsel in lawsuits pending in Illinois. Bob is a tireless and zealous advocate for each of his clients, whether the matter is bet-the-company litigation or a lawsuit involving more moderate liability exposure.

In 2017-2018, Bob was chosen by his peers in the legal community as a “Leading Lawyer” in the areas of mass torts, class actions, product liability and personal injury. The distinction of being named a Leading Lawyer has been earned by fewer than 5% of all attorneys licensed to practice law in Illinois. Notably, lawyers cannot nominate any lawyer within their own firm to be a Leading Lawyer. The independent Leading Lawyers Advisory Board rigorously vets nominated attorneys based on the results of annual surveys sent to every practicing lawyer in Illinois, ensuring that only the top lawyers in Illinois are recognized as Leading Lawyers. A large settlement Bob won for one of his clients in 2018 was recognized in The Chicago Tribune’s “Leaders in the Law” feature of the top settlements in Illinois. From 2014 to 2018, Bob was selected for inclusion in the Illinois “Super Lawyers” List, no more than 5% of lawyers in the state are selected for this honor. In 2018 Bob was one of only fifty-six Illinois lawyers selected for the Super Lawyers class action/mass torts list. Super Lawyers utilizes a multiphase selection process which includes independent research of each nominated attorney’s peer evaluations, experience, and professional achievements, including trial verdicts, settlements, honors, and awards. In 2015, Bob was selected as a "Premier 100 Trial Attorney" for the State of Illinois by the American Academy of Trial Attorneys (AATA). This award recognizes the top 100 trial attorneys in each state. Membership into AATA's Premier 100 requires the satisfaction of stringent criteria and standards established by the AATA Board of Directors, including notable verdicts, settlements and achievements. In 2015 and 2016 Bob was named an “Emerging Lawyer” by Leading Lawyers. The distinction of being named an Emerging Lawyer is reserved for the top 2% of Illinois lawyers who are 40 years old or younger and who have been identified by their peers as proving themselves to be professional, ethical, and experienced at an early point in their legal career. From 2009 through 2013, Bob was named to the Illinois Super Lawyers "Rising Stars” List, an honor reserved for no more than 2.5% of lawyers in the state, under the age of 40, nominated and selected by their peers in the legal community.

Bob is committed to giving back to his law firm and the community. An example of his exemplary pro bono service is the favorable monetary settlement Bob achieved on behalf of a prisoner in a Section 1983 federal lawsuit he prosecuted against the Cook County Department of Corrections involving civil rights violations for refusal to provide medical treatment.

Bob lives in Chicago with his wife and two daughters.