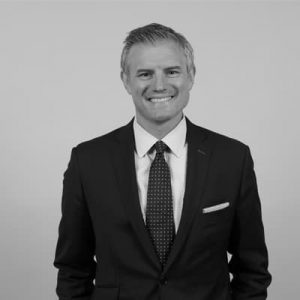 Ben Shrader is an experienced trial attorney, focusing his litigation practice on complex matters in state and federal courts throughout the country. He spends a significant amount of time representing parties in mass torts, class action cases, and single-plaintiff litigation. Ben represents clients ranging from global companies to small businesses to individuals, in civil matters including personal injury, premises liability, and commercial cases, in a wide variety of exposure scenarios. As a member of national coordinating counsel and national discovery teams for multiple Fortune 500 companies, he has supervised and managed the defense of tort litigation matters in jurisdictions across the United States. Additionally, Ben serves as Illinois and Indiana local counsel for clients involved in toxic and mass torts.

Ben also maintains an active sports and entertainment law practice. He serves as Chair of the Chicago Bar Association Sports Law Committee. Ben is a regular contributor to ConductDetrimental.com, THE Intersection of Sports and Law, and he has contributed numerous times to the Chicago Daily Law Bulletin’s “Sporting Judgment” column. Recently, he was part of a team that earned a favorable settlement on behalf of a class of retired American Basketball Association players in an ERISA case. Currently, he handles concussion litigation claims on behalf of retired NFL players. A former professional television and radio sportscaster in the nation’s #1 media market, Ben has provided counsel and advisory services to on-air talent from coast to coast. He also represents journalists and members of the media in defamation and free speech cases, stemming from activity in both traditional and online media.

Ben has been selected for inclusion in Super Lawyers’ Illinois Rising Stars list every year since 2017. No more than 2.5% of lawyers under the age of 40 in the state of Illinois are selected for this honor.

During law school, Ben served as symposium editor of the DePaul Law Review, which has also published his work. He was also a staff writer for the DePaul Journal of Sports Law. During law school, Ben interned in the United States Attorney's Office for the Northern District of Illinois. Using an Illinois Rule 711 senior law student license, he represented the United States government in federal court, successfully prosecuting petty offenders. He also served an internship in the chambers of Judge William Maddux, then the Presiding Judge of Cook County's Law Division.

Ben believes strongly in giving back to his community. He has been honored by the Circuit Court of Cook County, the Chicago Bar Association, and the Chicago Bar Foundation for his commitment to pro bono work, stemming from his defense of low income litigants in Cook County’s First Municipal District.

Ben lives in Chicago with his wife, Anna, and their son.